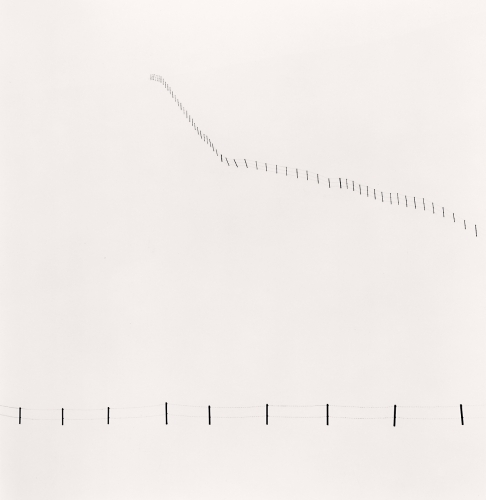 The descriptive power and the depth of thought, the skill of «logical thinking and unlimited imagination» — Michael Kenna, a reputed classic of landscape, unites two photography schools in his artworks. The first one is the European photography with its synthetic approach, where the subject is a path, a manipulation that results in a creative reinterpretation of the process and of the original concept. The other one is the classical American landscape photography school where technique, clarity, precision and close contemplation of the material world are important.

Italy, Switzerland, Japan, France, the United States, Russia — he collects the topics during the expeditions around the world with no limits, as nature has no borders. He supports the statement that it is possible to find yourself regardless of where you actually are. Kenna acts as a post-modernist in this context: he intentionally conventionally inscribes the presence of a human in an empty and ascetic composition with no people and no excess noise. The photography space becomes a stage where «the viewer himself can get up to experience the feelings he wants and to see what he wants.» Now it is the spectator’s choice how to look at the work according to the perspective of his own understanding. Kenna, being quiet conditional, requires maximum involvement — he limits on purpose the space for meditation to 7’5×7’5 inches. Coming closely to him, head-to-head, we do not just look, but peer into his photograph.

Immersion, peace and silence are captured on a medium format camera. Correct framing of a shot, well-defined composition boundaries and elaborated system of tonal relationships are an action, a process, and not a goal or a result. It is the way of communication with the entire world and with each and every person alone. It is the reflection on simplicity and balance; it’s the immersion in the inner world through the discovery of the outer one. Photography is close to theatre in its nature of recreating unreality, and for Kenna it is the way to create a post-dramatic landscape, a sacred space with the real world’s decorations.

Each landscape has its own character. According to Kenna, this is a philosophical discourse on the symbolic and aesthetic aspects of the image. «Comparison, correlation or opposition of natural organic elements and of more geometric structures created by people.» This is the architectonics of images through strict geometry of lines and simple forms — Kenna’s landscapes are built from symbols and design elements. As the ancient Egyptian and Chinese hieroglyphs were built from the images of mountains and trees, rivers and the sun. Minimalistic composition as the basics of Zen Buddhism.

Kenna works with texture through the tone, but not the colour. “The colour is too realistic for me. My soul calms down with black and white.” In such an abstract reality, time is indefinite and free. With a long exposure up to 10 hours, the camera patiently observes the movements of things, saves up time and events, and the photograph for the human eye becomes an evidence of transformations and metamorphoses like moving water evolves into a calm surface, and rain into fog.

He abides by traditional shooting methods. He usually shoots at nighttime or at the dusk, when there’s that moment of the world’s transition from one state to another. Such a night photography with its illumination peculiarities, unusual light sources and deep shadows is Kenna’s signature style.

And what makes him distinct from other photographers is his hard work on the prints. While film development is fulfilled by a standard process, printing for Kenna is a personal and delicate creative ritual with endless possibilities. Being a student of Ruth Bernhard, who is best known for her printing methods, he often uses different contrast filters for different parts of one photo that makes the areas with large and soft grains coexist. With sepia toning, highlights are warmed and step forth, while shadows are kept cool and move to background. «It turns out that moving from dark to light involves us into the picture, and the passage from warm highlights to cold shadows pushes us back.» And in this very moment, it is no longer technical or optical effects that become important, but the relationship that is born between the photograph and its viewer.